After what has seemed like an eternity of positively tropical (by British standards) weather – it was something of a tragedy that rain arrived in abundance over the weekend of the first Luftgekühlt GB meeting at Bicester Heritage Centre!

To paraphrase John Cooper Clarke – “the weather was just like the brothers……………………Grimm”!

Arriving in the Yellow Peril at the Heritage Centre at around 08:20 – I assumed I’d be a bit early for the official 09:00 opening time. How wrong I was.

After being held briefly in a queue – we went through ticket checking and then the air cooled Porches were separated off from the rest of the motoring flock to be parked in tastefully selected locations around the Heritage Centre by the Luftgekühlt crew. 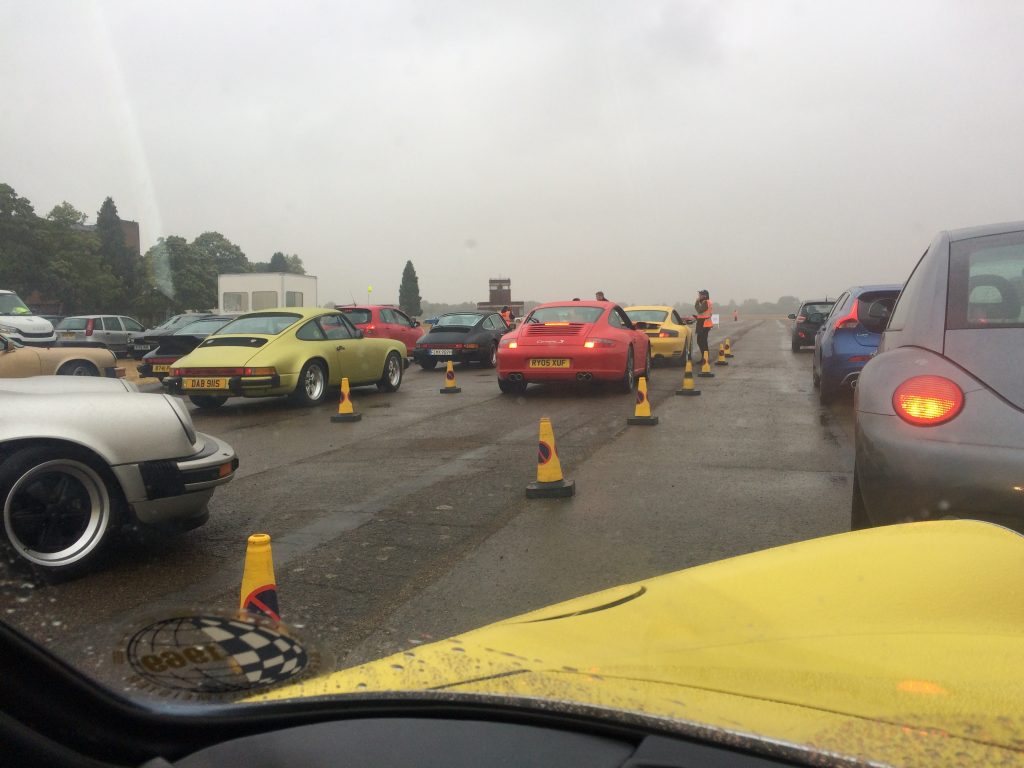 It was my first visit to the Bicester Heritage Centre and despite the weather – it was rather nice. Situated on a working airfield – it was a lovely collection of old huts, water towers and more substantial buildings – many of which have been repurposed as specialist classic car related businesses.

It had that spooky and slightly surreal feeling about it – the sort of place that would have been used extensively as a film set for The Avengers!

With the Yellow Peril ensconced in glorious isolation against a gloomy looking building – I donned my waterproof jacket, unfurled the umbrella and set off to explore.

A Walk Through (air-cooled) Time

The Luftgekuhlt event offered an opportunity to walk through Porsche’s air-cooled history as examples of most of their air-cooled production were scattered randomly (but vary tastefully) around the Heritage Centre site.

This Porsche Diesel Standard Tractor was parked outside one of the sheds containing slightly more exotic Porsche models.

Porsche built 125,000 tractors between 1956 and 1963 so they were certainly on a par with Lamborghini in the agricultural vehicle stakes.

This rather imposing beast is larger than the more commonly seen and smaller Allegier models and must be an essential purchase for Porsche collectors with a bit of land!

There were plenty of 356’s on show at the event – ranging from Coupe’s, Speedsters and Cabriolet’s. I never tire of looking at these beautiful cars.

One particular Spyder really stood out thanks to it’s massive and rather incongruous wing mounted above the cockpit. This is the 1955 Porsche 550 RS Spyder which was built to race and to set various records at circuits such as Montlhery, Le Mans and AVUS.

The wing looks really odd on such a precious old Porsche but it presaged the much more widespread use of wings in later race cars and right up to the present day.

There was a time when people couldn’t give away short wheel base 911s as people clamoured for later 2.2, 2.4, 2.7 and 3.0 Litre cars. How times have changed. In years gone by some people even “updated” their lowly SWB cars with grafted-on wheel arches, bigger engines and whale-tail spoilers to make them look like . Oh the horror!

The fact of the matter is that SWB cars in their standard form are lovely little cars. Their beautifully proportioned bodies,  narrow wheels and relatively low-powered (by later Porsche standards) engines provide an understated simplicity and purity of form and function.

There is probably no better sight than a grid chock-full of SWB cars being hurled around a race track with their drivers frantically sawing at their respective steering wheels to maintain sometimes elusive grip around corners or to squeeze around other cars.

Butzi Porsche’s design was right from the outset – right down to the tiny little details like the angled 911 script on the engine lid of early cars!

The Paul Smith Stripe Car was quite vivid but it’s not a showpiece – it was competing weeks earlier at Le Mans Classic and at Goodwood FOS.

The SWB car had a bit of a reputation being tricky to handle when less experienced Porsche drivers were exploring the limits of cornering adhesion. To address this – Porsche  extended the wheelbase of the 911 by 57mm in 1969 giving rise to the LWB Early 911.

This chassis modification was then followed by an expansion of the engine from 2.0L to 2.2L in the ’70 and ’71 model years before then moving to a longer stroke 2.4L engine to be able to cope with lower octane fuel. From this period – I’d say 2.2L short stroke S engine is the best as it revs so freely and makes a wonderful howl above 4,000 rpm. I am biased however as I have one tucked in the back of my ’71 911E.

The 2.4L S engine was also eventually expanded further to 2.7L to power the homologated 2.7RS of which around 1500 cars were eventually built. The increased capacity and Nikasil lining to the cylinders made this engine powerful, flexible and free revving.

911 R and ST models are rare birds. Porsche only made 7 of the super-lightweight Porsche 911 R race cars and not too many more ST’s were made.

The rarity and beauty of these cars has resulted in quite a number of full or partial replicas and evocations. If any of the cars photographed below are original cars then sincere apologies to the owners. It’s so difficult to tell.

I think the bulging wheel arches of the ST and usually twin plugged engine make for a really nice looking and potent car which is easily distinguished from the front chin spoiler and rear duck tail spoilered 2.4S and 2.7 RS models.

Looking forward to seeing my friend Kirk’s ST evocation as and when the bodywork and engine rebuild are completed and bolted together.

The 914 was originally conceived as a VW sportscar but the Wolfsburg firm backed down from the plans and Porsche ended up marketing the car themselves initially with 1.7L and then 2.0L VW for cylinder engines and then finally with a 2.0L Porsche flat-6 engine (the 914/6).

As they are mid-engined – they are supposed to handle very well and in period – the 914/6 was raced extensively – especially in the USA where film actor Paul Newman campaigned a team comprised of 914/6 cars.

They are not the prettiest of cars but the fat wheel arches and wider wheels of the 914/6 do at lest imbue the car with a bit of brutality in the looks department.

At least one flat-8 engined car was produced as a birthday present for Ferry Porsche.!

The pure driving experience they provided resulted in them being the personal car of choice amongst current and retired F1 drivers.

This pair of RSR race cars in their respective striking livery were prepared for racing by the legendary Kremer brothers in their motorsport facility in Cologne.

The brothers (Erwin and Manfred Kremer) were incredibly successful as privateer Porsche racers and their cars were more often than not at the front of the grid and their drivers on the top step of the podium at races throughout the ’70s, ’80s and ’90s.

The 1973 Oldenkott Samson liveried 2.8 RSR is currently for sale with Maxted-Page and it has a wonderful racing provenance.

The Jagermeister liveried RSR (also for sale at Maxted-Page) is 1976 Porsche 934 RSR Turbo with an equally illustrious racing pedigree.

Bit of a mixture of of modified and/or race prepared cars. Not entirely sure of the provenance and history of these particular cars but I’m sure someone will tell me.

Luftgekühlt GB was announced at fairly short notice so this and the dreadful weather probably impacted the numbers attending.

Despite that – turn-out was good and I think a follow-on gathering will be much better attended by dyed in the wool air-cooled Porsche enthusiasts.

The Bicester Heritage Centre venue was also good and friends Kirk and Dave who I met up with told me that the Scramble events involving a much more eclectic range of classic vehicles are well worth attending.