Such is the variety and age range of cars that turn-up for the Goodwood Members Meeting – it can sometimes be difficult to come up with natural grouping topics in a blog post.

Participants in a particular race or demo run is the safest option as these are normally related to a former race category from a specific time period unless it’s to celebrate the career of a racing driver in which case it might span many years.

I’ve never owned an Alfa but I really feel I should one-day ……… at least for a while!

In business since 1910 and in the business of racing since 1911 – Alfa Romeo has a fantastically rich and successful history.

Anonima Lombarda Fabbrica Automobili (A.L.F.A.) was actually preceded by an earlier company – Societa Anonima Italiana Darracq founded by Alexandre Darracq in Milan in 1906 to sell Darracq cars in Italy. NB: “Genevieve” – star of the eponymous film and real life stalwart of the London to Brighton Veteran Car Run is one of the more famous Darracq cars!

Poor Darracq sales resulted in a new car designs being commissioned for the Italian market and the company was re-launched in 1910 as A.L.F.A.

In 1915 – Nicola Romeo (originally from Naples) took over management of the company as it switched to the manufacture of military vehicles and equipment during WWI . The company name was changed from A.L.F.A. to Alfa Romeo in 1920.

The inter-war years constituted a golden period for Alfa during which they built a series of fantastic road and race cars. They dominated the racing scene and attracted the very best (and now legendary) racing drivers. Giuseppe Campari, Achille Varzi, Antonio Ascari, Rudolf Caracciola, Louis Chiron, Clemente Biondetti and my particular favourite – Tazio Nuvolari all competed successfully for Alfa Romeo.

Alfa’s racing dominance waned during the late 1930’s when the state supported German giants – Mercedes and Auto Union battled each other and the competition to take racing to new levels of speed and sophistication just prior to the outbreak of WWII.

It’s also worth pointing out that during the inter-war period – Alfa contracted out the management of its racing department to one Enzo Ferrari and the establishment of Scuderia Ferrari effectively spawned the Ferrari company after WWII when Alfa and Enzo parted company and Ferrari became a road and race car builder in its own right.

Of the Alfa’s racing at Goodwood – the 1938 6C 2300 Mille Miglia was particularly elegant with its beautifully streamlined bodywork.

With its curvaceous bodywork, diminutive size, central driving position and mid-mounted engine – this is a really pretty 1950’s sportscar!

The Bobtail was Cooper’s interpretation of the Kamm-tail – an aerodynamic bodywork enhancement that was scientifically proven in 1936 at the Forschungsinstitut für Kraftfahrwesen und Fahrzeugmotoren Stuttgart by Wunibald Kamm.

The Cooper Porsche T39 Bobtail was with a mid-mounted 1.5 Litre 356 boxer engine instead of the more commonly used 4 cylinder Coventry Climax unit.

In the USA – the Cooper Porsche was affectionately referred to as the “Pooper”! 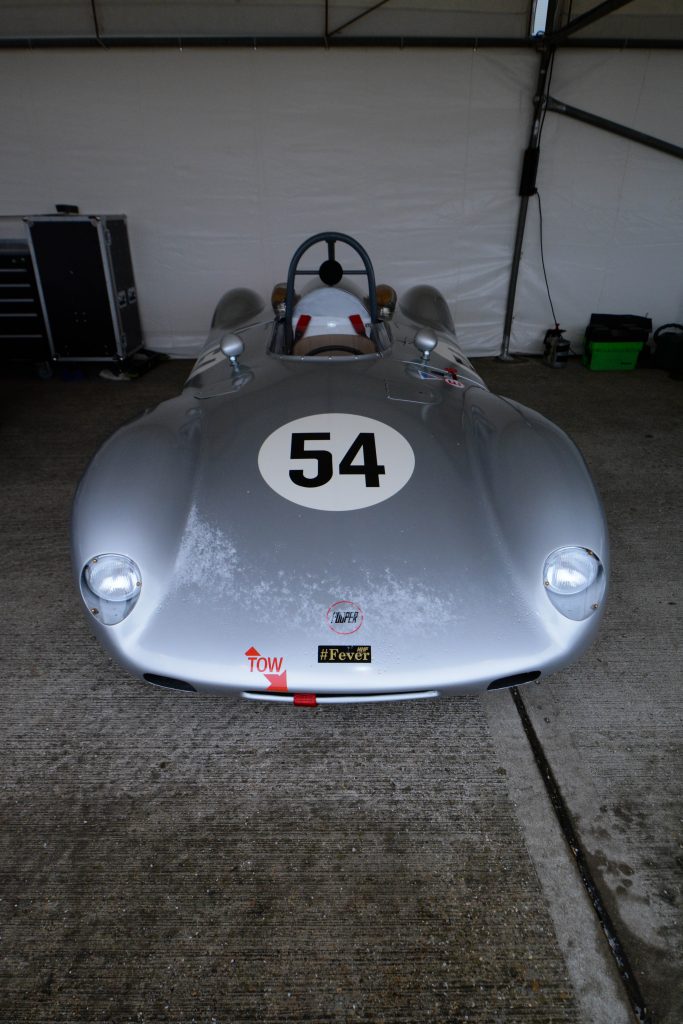 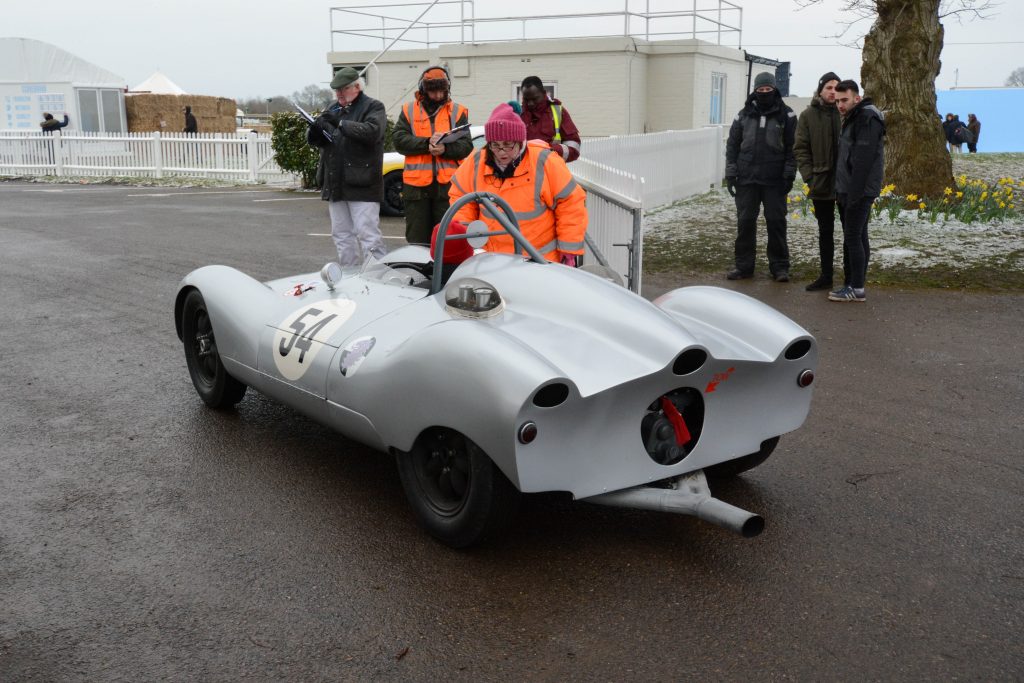 Although it was built between 1964 and 1969 – the production run of cars amounted to only 105 cars which is really surprising as the GT40’s seem to be quite ubiquitous on classic sportscar grids. This might actually be down to the rugged build of these cars which gave them reliability on track in period and longevity in terms of their continued ability to compete in classic racing.

The car was based upon the Lola Mk6 but to ensure success – Ford employed Lola founder Eric Broadley to design and develop the GT40. Broadley did a great job before returning to his own company with a useful cash injection from Ford to to develop the legendary Lola T70.

The great back story to the GT40 is that it was commissioned by Henry Ford II to wreak revenge on Ferrari after Enzo renaged on a deal for Ford to buy Ferrari. Ford spent millions of dollars in carrying out due diligence on Ferrrari so they were non-too pleased when Enzo pulled out due to a dispute over Ford not allowing Ferrari to compete in the Indianapolis 500 race against Ford engine competition.

The net result was that Ford vowed to beat Ferrari at their own game and the GT40 was their weapon of choice to achieve this. It should be noted that quite of few special cars and even car marques resulted from Enzo pissing-off various car manufacturers and engineers e.g.  the Ford GT40, the Bizzarrini created Ferrari Breadvan which out GTO’d the GTO that he designed whilst still employed by Ferrari, Bizzarini’s Iso designs (Rivolta, Grifo etc.), Bizzarrini badged Strada & Corsa and last but not least Bizzarrini’s long lived V12 engine designed for Lamborghini.

The GT40 is a classic example of a Euro/US hybrid with its British designed body/chassis and big bruiser, reliable American V8 engine. Look here for more on Euro/US Hybrids!

The 40 in GT40 stood for the 40″ height of the car which was powered by Ford V8 engines ranging in capacity from a relatively modest 4.2 Litres right up to stump-pulling 7 Litre engines. GT40’s achieved four back to back outright wins at Le Mans between 1966 and 1969:-

The Goodwood 76th MM race in which the GT40s featured was to commemorate Dan Gurney who died in January 2018.

It’s not often you can say that you’ve seen a “shed load” of Porsche 904s but I could do that at the Goodwood MM as there was a gaggle of 904’s huddled together in the paddock sheds.

The 904 was designed to race in the FIA-GT series from 1964 and it shared its mid-engined configuration to it’s predecessor the Porsche 718 RSK.

As the flat-6 901/911 engine wasn’t immediately available for insertion into the 904, Hans Metzger was tasked with upgrading the Ernst Fuhrmann designed four cam flat-four 587/2 engine from the Abarth Carrera. The resulting 587/3 engine delivered 180bhp at 7200 rpm and benefitted from improved air cooling fins for the cylinders and a larger oil cooler.

The Ferdinand Alexander “Butzi” Porsche designed body and chassis of the 904 which was quite revolutionary for Porsche as it consisted of a fibreglass body bonded to a steel ladder chassis. This construction gave the car great rigidity and the slippery bodywork also delivered an incredibly low drag coefficient of just 0.34.

The body of the 904 was made up of 50 pieces of fibreglass which were formed and assembled by the Heinkel Aircraft Company and completed bodyshells were then transported to Zuffenhausen to be bonded to the ladder chassis.

Suspension and brakes were also a radical change for Porsche by adopting coil springs and disk brakes at each corner rather than the traditional trailing arms (front), swing axles (rear) with drum brakes all around.

This well engineered and reliable car clocked up a number of class and outright race wins in many of the most famous races and circuits of the period including the Targa Florio, Nurburgring and Le Mans. The 904 laid the foundations for successful race cars to follow such as the 906/910 and the mighty 917 which delivered Porsche’s first outright win at Le Mans.

I think the 904 is one of the prettiest cars that Porsche ever made and whilst the originals are way outside my buying capability it might be quite interesting to build a replica using one of the quite  highly regarded kits. Does anyone have a spare flat-eight Porsche engine they want to donate?

As an onward evolution of the 904 body/chassis design – the 906 was designed with a much more lightweight space frame chassis and non stressed fibreglass body with the whole car weighing in at just 580kg.

The car was normally powered by the flat-6 2.0 Litre engine but a small number of cars were fitted by the flat-8 engine also used in the preceding 904.

The 910 was created in late 1966 and continued to be made in 1967. It differed from the 906 by having F1 style 13″ wheels with a centre lock nut rather than 5 studs. The bodywork of the 910 was also lighter and shorter than the 906 which improved its power to weight ration despite using the same 2.0L flat-6 and 2.2L flat-eight engines.

The 910 just wasn’t able to match the power of competing cars such as the GT40 although it did have very good results in hillclimb events. It was however a further stepping stone for Porsche towards their subsequent highly successful sportscars – the 908, 917, 956, 962 and beyond.

Like the 904 – the 906/910 is a beautiful car and amazingly – some were run as road cars despite their low ground clearance and somewhat impractical (for day to day use) gullwing doors.

I’d be quite happy to have one for supermarket runs!

It’s difficult to know which photos NOT to include.