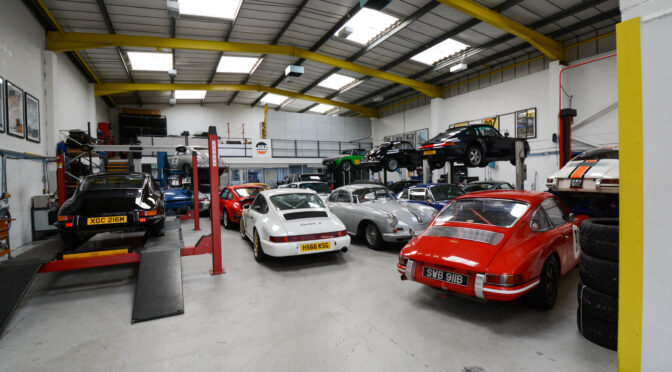 A rather annoying and inconsistent recalcitrance to rev has afflicted my old 911 for a some weeks. Having adjusted the choke and swapped the CDI box to no avail – Steve opted to swap the ignition coil on my latest visit to Jaz Porsche in St Albans as symptoms suggested insufficient spark.

Saturday morning in St Albans just wouldn’t be the same without an obligatory cooked breakfast start at The Smokehouse Deli. This also provided the opportunity to get the low-down on Steve and Simon’s exploits of the previous weekend at the Spa 6 hour race.

They had been racing their respective ’65 SWB 911s with varying degrees of success. Steve was pretty happy with his car and his performance having finished 6th in class out of 35 starters and his car was the 2nd of the 911s to finish. Simon on the other hand was frustrated by a carburettor issue which left his engine performance a bit flat but despite this his car still finished 15th in class.

Listening to the debate about the best racing line, speed and gears  for particular bends was fascinating. The Jaz team seem to be building up quite an entourage for the event which I might join next year as I’ve never yet been to Spa and the 6 hour event sounds like good fun.

One more race this season for the Jaz team (a three hour relay race at Silverstone) before they can start the “Winter” strip-down and rebuild of the race cars for next season.

All visits to Jaz offer the chance to snoop around the current collection of customer cars in the workshop for restoration, repair or race-preparation.

On this particular visit – there was a nice smattering of 356s (including the pre-A that Steve prepared and supported at this year’s Mille Miglia), a 914-6 recently brought across from the USA, 911s (new and old) and Steve and Simon’s Spa splattered race cars.

Upon arrival – Simon set-to on removing his starter motor to investigate the cause of the noisier than normal start-up (missing teeth on the ring-gear) whilst Steve tried to balance dealing with customers requiring parts, phone calls, parts deliveries, swapping my coil and other quick fixes and advice for folks popping-in on the off-chance.

The SWB race 911s were set to be cleaned of their grime, special Spa lighting and scrutineering tickets before being set up for the last race of the season at the end of September. I was intrigued by their two ancillary lights bolted to the front corners of the cars and angled outwards. Simon explained that these are required to adequately illuminate the apex of the corners at Spa during the night racing.

Once Steve had moved a few cars onto the forecourt from his jam-packed garage to make space for my car – It was a quick and simple job for him to swap my coil for one of his spare coils.

In doing so he pointed out that original black coils as used in early 911s right up to the SC are far better than modern Porsche factory versions Despite their £300 price tag the modern units are apparently rather variable in quality with some prone to failure. Not good.

Revving the engine whilst the car was static to test the replacement coil wasn’t really adequate as the engine needed to be under hard acceleration load. Consequently it fell to me to take the car for a test drive.   As it had been misfiring all the way to St Albans earlier in the say – I was hoping that the test would give a clear-cut binary result.

As I pootled out of the industrial estate the engine felt a little smoother but I needed to head out onto the North Orbital road in order to “give it the beans”. A gap in the traffic appeared – I slotted the car into second gear and accelerated hard from the slip road  onto the dual carriageway.

To my delight the engine tone transformed into the wonderful 2.2S roar as the rev counter needle rotated rapidly towards the red zone before 3rd gear beckoned. The cycle was rapidly repeated through 4th to 5th gear until traffic ahead forced me to throttle back.

I seemed to have the binary result I needed – my old coil must have been at least contributing to the uneven and inconsistent spark. Doubling back to the Jaz garage – I gave Steve the good news before heading back to London.

The journey home acted as a further extended test and the engine seemed to pull strongly. As I peeled off the M1 and hit the roundabouts and traffic light junctions – the car was also ticking over much more smoothly at around 800rpm rather than hunting around at around 1500rm as it had with the old coil.

Problem diagnosed and fixed? Sadly no – after parking the car in the garage for a few hours,  I took it out and it had the same hesitancy at anything below 3,000rpm and at tick-over it was on the cusp of stalling.

So we seem to have eradicated the CDI box as a suspect and the different coil has given some improvement. It runs well at high rpm and wide throttle openings but chugs at lower speed and low revs.

Next steps – give it a good blast up to Silverstone for the 30th Sep AMOC meeting to allow further analysis. Check plugs, plug leads, distributor cap and distributor. Just hoping it’s not the fuel injection pump or injectors.

I also have to fit-in a visit to Sportwagen to get my rear quarter bumper repaired after someone rear ended me at a pedestrian crossing in Crouch End earlier in the year. The old chap who hit my car refused to provide his insurance details on the grounds that he’s a pensioner and couldn’t afford to lose his no claims bonus. A view to which I wasn’t terribly sympathetic!