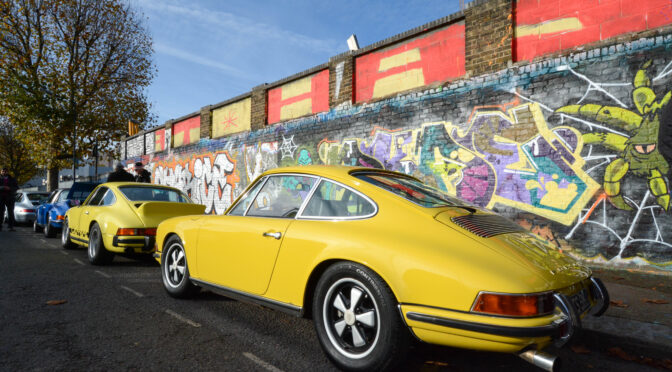 Nick and Ed Pike – organisers of the London Region 20 faction of Porsche Club GB really have really excelled themselves in finding a vibrant alternative venue for the monthly London Region get-together.

The 3rd Saturday in the month “Smithfield Meat” gathering was great but it was sadly traffic-wardened out of existence. It’s been replaced by the 3rd Sunday in the month “Out East” gathering which I think should be renamed “Art East” both in deference to the cockney accent but also to the astonishing display of vivid and endlessly evolving graffiti on the walls along the streets used for the gathering.

The new venue is a  little bunch of semi-deserted (on Sunday morning at least) streets tucked between the A12 and various tributaries of the River Lea just across the water from the London Stadium (now West Ham’s home ground and nee Stratford Olympic Stadium).

For those of a fishy inclination – Stour Road is the home of H. Foreman & Son – the venerable London Cure Smoked Salmon company which has operated from the East End since 1905.

Beachy Road is listed as the target destination by the Porsche Club but the most vivid graffiti artwork can be found round the corner on Stour Road (which joins with and runs parallel to Beach Road) and on Bream Street which runs off Stour Road.

Thankfully the 08:30 kick-off time on a normally restful Sunday is appeased through the availability of a friendly cafe serving the urgent caffeine needs of the attendees.

For a brief time in the early ’80s – I lived nearby on the 17th floor of a “difficult to let” tower block off Roman Road. My old mate, co-renter at the time and arch-photographer Gordon stayed on in the area  thereby gaining a much more deep understanding of the changing local artistic vibe.

Gordon monitored the state of flux of local graffiti and focused on one particular wall along the canal which attracted the most intense attention of local artists. His Photo-Book – Wall was and is brilliant as a timeline of that particular section of brickwork.

Arriving at Beachy Road 08:30 – I was amazed at how many cars were there ahead of me.

My eye was immediately caught by a blue 1971 2.2 Litre Targa – the same model year as my 2.2 Litre 911E. As I engaged with the owners who admitted to also having recently bought a ’68 912. Then Steve (a friend made at the “Smithfield Meat”) roared along the street in his immaculate and rare ’74 2.7RS.

Weirdly as we chatted – it transpired that the owners of the Targa had recently become customers of Steve Winter at Jaz Porsche and Steve (RS Owner) was just about to become a customer to resolve some engine tuning and transmission issues. This was nice as Steve Winter has looked after my car for over 20 years.

As a road sweeper truck turned up to clear-up the Autumn leaves along Beachy Road – we opted to drive around the corner onto Stour Road encouraged by Nick’s promise of better graffiti on the walls.

Eventually – we managed to get the gaggle of early 911s (three 2.2 Litre cars and Steve’s RS lined-up along the graffiti gallery wall and as the sun rose ever so slightly – the cars started to glow almost as much as the artwork backdrop.

What a lovely bunch!

What was meant to be a brief visit was extended by one Porsche nerdy chat after another with fellow anoraks and my 08:30 start extended to an 11:30 finish.

In conversation I gained further insight into the trials and tribulations of Steve’s three year 2.7 RS restoration and into the unique features of his particular ’74 model which I’d been previously been blissfully unaware of.

I also listened with interest to the stories of the other two 2.2 Litre cars – the blue Targa and the Burgundy Coupe (LHD former US cars). Both cars looked fantastic and the palpable excitement of relatively recent ownership was evident. My car still puts a grin on my face after 20 years of ownership!

Whilst my particular Porsche predilection lies firmly in the Early 911 period – it was really interesting talking to people who owned old and new Porsches or even just new Porsches. Whilst they waxed lyrical about the physics-defying capabilities of their modern cars – all without fail preferred or aspired to own an early car.