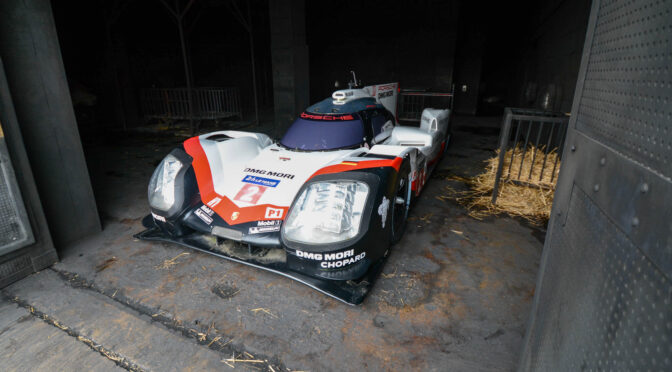 This Porsche Club GB organised event was delayed for so long by the COVID pandemic that I’d forgotten I had a ticket and I almost didn’t attend. I’m glad I did.

It was a great idea to utilise the amazing Fire Service College close to the club HQ at Moreton-in Marsh for a gathering of Porsche cars …… with a difference.

The enormous site incorporates a 300 acre Incident Ground which includes burnt out domestic and commercial buildings, a replica ship and dock, a section of 4-lane motorway, a section railway track with a train on it, a wrecked airliner, a fighter jet, a simulated oil rig, wrecked cars and all manner of other potential fight fighter scenarios.

All of these facilities offer state of the art real-life incident training for fire fighters to complement their theoretical instruction and better prepare them to tackle one of the most dangerous jobs anyone could take on.

For the visiting Porsche club members, the Incident Ground provided a strange post-apocalyptic landscape to act as an unusual backdrop for some interesting cars.

I’ve previously attended similar events such as Luftgekhult at Bicester Heritage and there were some similarities as both were held on former or current airfields but there was something more brooding and menacing about the Incident Ground due to the stark juxtaposition of cars in what looked like a war zone. The gloomy and bitter cold weather added to this sense of menace.

As I entered the college grounds behind a long queue of Porsches old and new, I assumed that I’d just follow them into the car park but I was instead asked to switch on the Yellow Peril’s hazard warning lights and follow a club van into the Incident Ground to be strategically parked up as part of the show ….. which was nice.

As I walked across the vast site towards the welcoming sight of the club Porsche Club coffee tent and an adjoining catering van, it was difficult to spot where cars had been secreted around the vast site. My eyes were however immediately drawn towards two amazing race cars parked at different angles on a section of motorway. Other cars were much more carefully hidden behind, between and even inside some of the burnt out buildings.

The black Porsche 956 with Preston Henn’s T-Bird Swap Shop livery was driven to 2nd place in the 1984 running of the Le Mans 24 Hour Race by John Paul Jr. and Jen Rondeau.

I first started attending Le Mans in the early ’80s which coincided with the 956 and later the 962 being introduced and then progressing to absolute dominance of endurance racing.

The 956 was designed by Norbert Singer under the new Group C regulations, replacing the Porsche 936 which ran under Group 6 regulations. It first appeared in 1982 only to be superseded by the modified 956B in 1984.

In 1983, the mercurially brilliant Steffan Bellof broke the lap record in his 956 at the Nurburgring Nordschleife during qualifying for a 1000km race. Incredibly, this record stood for 35 years and was only beaten in 2018 by Timo Bernhard in a de-restricted 919 Hybrid in a on-off no limits speed record attempt.

The 956 was superseded by the 962 due to the need to meet revised regulations requiring the driver’s feet to be behind the line of the front axle.

During their active racing years between 1982 and the mid 1990’s, 956’s and 962’s were driven by a plethora of well established motor racing legends including Derek Bell, Jochen Mass, Jacky Ickx and Jurgen Barth and a whole host up and coming drivers such as Steffan Bellof.

Preston Henn drove a 956 in the 1983 running of the Le Mans 24 Hour Race, finishing 10th with co-drivers Jean-Louis Schlesser and Claud Ballot-Lena.

This car has a rather complicated history starting life in 1977 as a factory race 934 sold by Vasek Polak to Ron Brown in the USA. It had a busy racing life during the ’77 and ’78 seasons before suffering a serious crash in October ’78.

The crash damaged car was consigned to the A.I.R. workshop where the chassis was deemed to be unrepairable so all mechanical components were removed and then installed into a brand new 935 body shell.

The great thing about racing 934’s and 935’s is that they had to retain the basic 911 body shape albeit with massive modifications to improve aerodynamics, house much wider wheels and tyres and accommodate complicated plumbing for the turbocharged engines.

But underneath the spoilers, expanded wheel arches, massive wings and various cooling ducts, there lurks the unmistakeable outline of the 911 which first saw the light of day in 1963.

A ’68 SWB 91 in a lovely shade of green parked in front of a green shipping container backdrop.

Around the corner from this was a crazily painted 911 rally car sitting high on its raised suspension against a mountain of concrete rubble which had crushed cars and mangled metal poking out of it.

Further down the road was this 964 Carrera RS in Rubystone Red. Not a colour I would choose myself but there’s no denying that it is striking and for some reason, it does seem to suit the 964. A loud car in every respect!

A black and brooding 911 Turbo was parked close to a burned out industrial unit looking like it was the getaway vehicle of choice for would be arsonists.

The 919 looked like a burned out barn find, tucked away as it was in the depths of yet another burned out building. Not the prettiest Porsche race car but quite definitely one of the most potent. Seeing these hybrid cars deploy stored electric charge as they exited a bend at Silverstone or Le Mans was a site to behold. Their fearsome acceleration made the cars around the seem to go into reverse gear.

As I entered a large compound in front of a blackened block, a raucous and fairly rusty white ’73 2.4 911 S was being positioned across the face of the building close to when the 919 race car was almost hidden away inside a bible-black burnt out garage.

The elderly driver of 911S was regaling another visitor with facts and stories derived from his 36 years and 300,000 miles of ownership. One comment was quite poignant as he admitted that the car could do with another major restoration but he was reluctant to start one as he might not live long enough to see the end of it.

Around the other side of the same block I came upon what was probably my favourite sights of the day in the form of Delwynne Mallet’s beautiful split-screen 356 Streamliner parked in a small courtyard beneath a menacing multi storey block.

Similar cars built by the Porsche factory during the earliest days of Porsche 356 production established the racing credentials of the marque in the early 1950’s.

There’s even a supercharger shoe-horned into the engine compartment to give this diminutive but lightweight and slippery car soon oomph!

Walking out of the courtyard and turning left, revealed another 919 parked at an angle across a cobbled ramp. There’s something rather menacing about the frontal aspect of the 919 and it must have been a scary sight when viewed in the rear view mirrors of slower cars it was competing against.

Moving across the Incident Ground I spotted two 914-6 GT cars, their bright orange liveries standing out against the backdrop of an old fuel tank railway carriage and what looked like a burned out oil refinery.

Fat Fuchs wheels fill the flared wheel arches of the 914/6 to give it a completely planted stance.

Adjacent to the same complex, was the immaculately restored Porsche club VW van looking for all the world like a period race support vehicle with “PORSCHE” emblazoned along its flanks and the Porsche crest on its doors..

This Tuthill prepared 3.0L Carrera RS won the 2021 RAC Rally ahead of a massive turnout of Ford Escorts plus a few other makes. It looked extremely purposeful and had proven (in the right hands) to be more than a match for much more traditional rally car models.

Walking back towards where the Yellow Peril was parked, I came upon a remarkably faithful replica of the Valliant 934 RSR race car in its distinctive green livery.

I believe this car can be hired out for track days through JMC Racing which could be fun!

The nose to nose staging of a 993 RS and 964 RS against the backdrop of a fake dock and ship was well thought through. The two blue bruisers looked like they were facing up for a scrap.

Last but least, I came back to the Yellow Peril tucked alongside a mocked-up industrial facility. Having it included in the event was an unexpected pleasure and I was able to have a few good chats about the old girl with passing admirers.

Despite the freezing temperatures, this was a really unusual and enjoyable day out, wandering around the bleak and windswept site to view some lovely Porsches in strange situations and with interesting backdrops. Thankfully – ample supplies of bacon butties and lashings of fresh coffee kept hypothermia at bay and I look forward to a repeat of the event sometime in the future …… but hopefully in warmer climes.