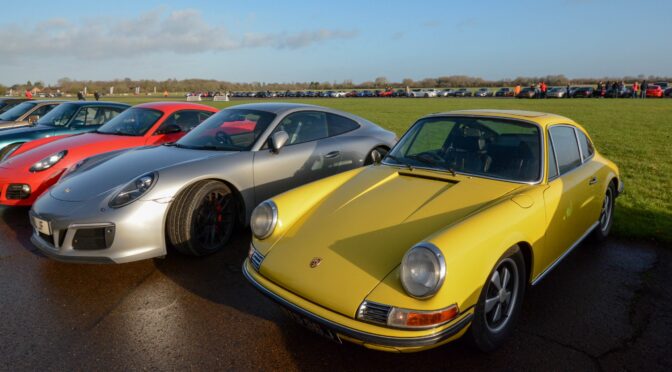 December’s a funny old time to be holding a big Porsche gathering given the vagaries of UK weather but the thankfully mild (but wet) weather de-risked the dissemination of salt and all roads led to Bicester Heritage for a Porsche Club pre-Christmas gathering.

Mooching around the gathered Porsche’s and meeting up with old friends was great although the wife still hasn’t quite grasped the attraction of OBIF (Old Blokes In Fields) events. Even the slightly less cold delights of a Porsche filled aircraft hanger failed to entice the wife to stay too long.

You don’t see that many short wheel based 911’s knocking around these days, especially during the Winter months so the sight of an even more rare RHD 1967 SWB 911S was a very welcome sight.

I’d previously seen this particular car at Silverstone Classic where its owner and PCGB stalwart provided some background this beautifully original car.

It’s inevitable that any long lived car model goes through a process of evolutionary change to correct particular foibles, improve handling, increase power, incorporate new technology and so-on but the pure essence of the original design can be lost along the way.

Parking a contemporary 911 next to this SWB car really highlights how far the the two ends of the development lifecycle have diverged. It’s good to be reminded of the purity and simplicity of Butzi Porsche’s original design. Less is more!

In addition to the SWB 911, there were a few Early 911’s and some 912’s gathered in the hanger and out on the airfield roads but for some inexplicable reason, not many ended upon on my SD card. Two out of ten ………. must try harder next time.

From my personal perspective, the simple but handsomely brutal lines of the ST are just perfect. This race bred variant of the early ’70’s 2.2 was pumped-up in more ways than one.

Front and rear wheel arches were substantially flared to house much fatter wheels and race rubber and the short stroke engine was expanded to 2.5 Litres to boost bhp and torque.

The rest of the body retained the lines of the classic early LWB 911 along with chrome engine grille and original looking (but actually fibreglass) front and rear bumpers. Lightweight engine lid and bonnet with chunky fuel filler poking through added to the overall effect and the interior benefitted from a chunky roll cage, safety harnesses and lightweight race seats.

Additional driving lights and switchable road-going/race exhaust contributed to the purposeful look of this particular car.

Weirdly, I know three people who are currently building ST replicas. I can’t wait to see them as and when the weather improves and they are able to get their fire breathing ST’s out on the road.

Before I was seduced by charms of the earlier ST, the lines of the RS and RSR were my favourite 911 manifestation. These were the epitome of fast, superbly handling but immensely practical road going sports cars in their day.

Beloved by F1 drivers and discerning enthusiasts alike, the RS and more track based RSR more often than not came in safety-fast colour schemes with PORSCHE and CARRERA logos lavishly emblazoning on their flanks and rear ends. Lary colours were definitely a good thing given the speed differential with other contemporary road cars but I always felt that the logos were a bit unnecessary for something so visually unique.

One of the factors that probably caused my affections to swing towards the ST was the number of RS replicas that were and probably are still being built. One bit of me felt that the replicas devalued the original but realistically the rapid increase in original RS cars put them well beyond the reach of normal mortals.

I guess that well constructed replicas based upon similarly aged cars or even backdated more modern ones are as good if not better than some of the originals in looks, performance and handling and guess what, if I happened to have a windfall of cash, I would very much like to build an ST replica (after buying a 356 for the the wife). So that comprehensively boots any pomposity about replicas out of the garage door!

Before I got properly interested in Porsches, the 911 Turbo was just on of those must have motors. When it first hit the roads in 1975, it was completely bonkers with it’s flared wheel arches, fat wheels and tyres and engine lid mounted picnic table.

My feelings at the time were that it was a pretty brutish and not particularly pretty car when compared to some of the sport car competition. What was clear from the reviews of the car at the time however, that the Turbo’s looks were driven by the entirely functional need to hurl it down the road as rapidly as possible and ideally prevent take-off.

With the passage of time – the looks of the Turbo now look far less radical and there is a curious charm about its functional appendages. Steadily increasing prices of the early turbos confirm that I’m not the only person wanting to won one. One day ………. I will be able to picnic on my Turbo!