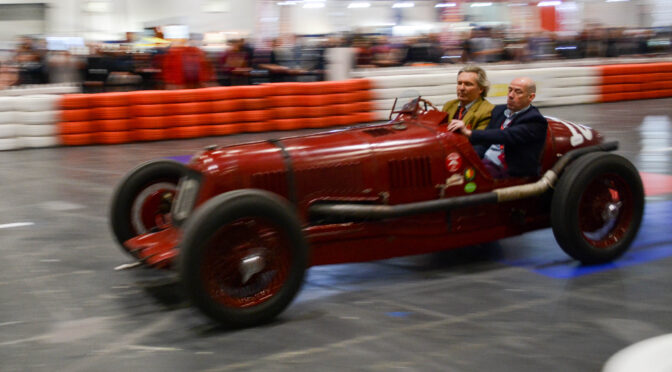 This Classic Car Show continues to expand in terms of the volume and variety of cars on show and in terms of the size of the Grand Avenue where cars are driven up and down the cavernous main hall to improve the visual and aural experience for the audience.

One of the parameters I use for assessing the quality of motoring  events is the number of rare, unusual or never before seen (other than in pictures) cars that I encounter.

As a dyed in the wool Porsche man I’m afraid the show’s focus on Ferrari left me a little cold. Modern Ferrari’s just don’t do it for me but I do grudgingly admire some of the older road and race models from the ’50s, ’60s and ’70s.

I particularly like the sublime lines of the 250GT and the 512 Berlinetta Boxer. To me these cars  epitomise the transition from traditional front-engined Gran Tourisimo road-racers to the all-together more modern mid-engined models.

Maserati is going through something of a resurgence at the moment but it has gone through many changes of ownership and design influence since it was originally established on 1st December 1914 by the Maserati brothers – Alfieri, Bindo, Carlo, Ettore an Ernesto.

Wit the exception of the Tipo – the cars featured here were created long after the Maserati brothers relinquished ownership of the company but to my mind they represent the pinnacle of the company’s success in terms of racing and in terms of their desire to produce high quality GT cars.

The Tipo is a glorious car which epitomises the Maserati brothers ethic in terms of competitive pre-war race car production.

The 250F took this to the next level in the post-war period and this superlative race car was loved by all of the great drivers of the day who raced it i.e. Fangio, Moss et al.

The 5000GT marked the zenith of Maserati luxury GT car production during the very late ’50s to mid-60’s.

With the exception of masterpieces like the later Merak, Bora and Khamsin during the Citroen years – Maserati did lose its way but thankfully it now seems to be finding it again. Eccellente!

One of my most favourite cars is the Mercedes-Benz 300SL Gullwing. It’s just so jaw droppingly beautiful.

The 300SL road car was based upon the Rudolf Uhlenhaut designed  W194 300SLR race car who’s complex aluminium spaceframe running each side of the passenger compartment necessitated the use of gullwing doors. The wide sills encasing the spaceframe chassis made entry and exit difficult even with a pivoting steering wheel to improve driver access.

Unlike the carburettor fuelled Uhlenhaut racer – the road going car utilised the first production mechanical fuel injection system on the 3 Litre straight six engine giving the car a top speed of 160mph. In the mid to late ’50s – this meant that the Gullwing was the fastest available production car.

The 300SL Roadster followed on from the Gullwing Coupe and beautiful though it is – it lacks the sheer drama of the Gullwing.

The 190SL was a lower priced 4 cylinder car who’s lines and specification fell far short of the exuberance and beauty of the 300SL. The pre-war 540Ks are majestic and the 300SLR is magnificent especially in infamous “722” Mille Miglia Moss & Jenks form!

Always nice to see some good examples of the Porsche marque and there was a good spread of race cars (including those in the Jacky Ickx tribute), a fantastic Joest 962, 356 Speedster and Coupe models and lots of lovely 911s.

One very unusual sight was a 917K replica created by Icon Engineering over the last five years. This labour of love looks rather convincing but the poor “little” 964 power-plant looks a bit lost in the massive engine bay. Its deficit  of 6 in the cylinder department leaves the engine bay looking woefully under-utilised!

The Tuthill SC recreation based on a ’72 2.4S was also very interesting. Olive green is a peculiar colour which can look great in a certain light and not so great in different light conditions. Setting this aside however the SC conversion looked fantastic with beautifully hand sculpted metal wheel arches housing fat wheels and tyres. The engine had also been swapped for a beefy 3.6 unit which should make it rather a fun car to drive!

I’m fascinated by cars spanning the pre-war and immediately post-war periods. They include some incredibly advanced pre-war designs and some ground breaking post-war innovations.

Cars from this period on display at the London Classic Car Show were at various stages in their restoration providing wonderful insight into the meticulous nature of the work required to return them to fully roadworthy condition.

One particular favourite was the Vittorio Jano designed Alfa Romeo 6C 2300 Aerodynamica. With its McLaren like central drivers seat with passenger seats either side, its mid-mounted engine and Josef Micki/Paul Jaray influenced aerodynamic bodywork – it is hard to believe that it dates from 1937,

Had WWII not intervened – the car was destined to receive an experimental V12 engine which would surely have established it as a pre-war supercar alongside the Silver Arrows racing leviathans from Mercedes and Auto Union.

A good number of out-and-out racing and rally cars were on display. Sad to see most of them in static display but they did manage to get few out on parade laps of the Grand Avenue.

The Maserati Tip 26B made a glorious sound as the exuberant driver scared the marshals with some high revving shenanigans.

The Le Mans Deep Sanderson was an interesting survivor and the Joest Porsche 962 and Matra’s were just great.

Some of the wonderful front ends of the cars on show:-

The shapely rear ends of some eye-catching cars at the show:-