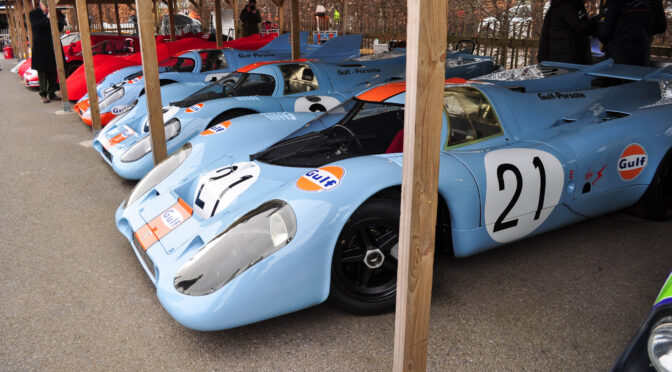 The signs are unmistakeable – Spring has definitely sprung! :-

Apologies to my neighbours but firing up my noisy old 911 for an 05:30 start was essential in order to get out of London, blast down the A3 and park-up in a West Sussex field in time for the 07:30 opening of the gates of Goodwood Race Circuit.

It was amazing to see so many like minded classic racing somnambulists wandering through the gates and across the dormant starting grid toward the paddock but the sound of race-tuned engines being fired-up acted as a great alarm clock.

The exotic machinery scattered around the serried ranks of paddock sheds (oops – I believe the proper Goodwood term is “shelters”) left me feeling like a kid in a sweetshop not knowing which way to turn.  Then I spotted a row of multi-coloured car covers forming the unmistakable outlines of slumbering Porsche 917’s………………

The prospect of seeing and hearing a whole gaggle of 917’s blasting around Goodwood with air cooled flat-12 engines blaring in the Group 5 Sports Cars demo run was my prime reason for attending the 74th MM. They didn’t disappoint!

In the early ’70s in “K” (Kurz Heck/short tail) form these cars were hitting 240mph on the Mulsanne straight at Le Mans.

For more background – look at the A to Z of Car Stuff post: P is for Porsche 917.

The fact that the 917s would be accompanied on-track by contemporary protagonists in the form of Ferrari 512s, a McLaren Chevrolet M6GT and Lola Chevrolet T70 Mk3Bs was the icing on the Group 5 cake.

Wheel Out The Historic Drivers

A number of the original late ’60s/early ’70’s class of drivers were also on hand to pedal these wonderful Group 5 cars around the track.

From the big grins on the faces of Richard Attwood, Derek Bell and David Piper after the demo run it was clear that they’d had an absolute hoot re-living their sports car heroics in their respective rapid Porsche 917 projectiles.

All three of them raced 917’s in earnest in the day and more recently in historic races with Richard Attwood having co-driven the Porsche KG Salzburg 917 (with Hans Herrmann) to Porsche’s first outright Le Mans victory in 1970.

As well as racing in F1 and Sports Cars since the ’60s  – Derek Bell and David Piper also worked as stunt drivers in the making of Steve McQueen’s film Le Mans. During filming – David Piper suffered an enormous crash and lost part of his leg but that didn’t deter him from continuing to race.

For more background on Derek Bell and 1980’s endurance racing cars – look at A-Z of Car Stuff:  B is for Bell & Bellof.

Nick Mason was also on-hand to blow the cobwebs off his Ferrari 512S with Jochen Mass (another renowned Porsche racer) looking on enviously as all of the Group 5 cars gathered to go out on track.

Some Other Interesting Cars

The following gallery is a melange of other Goodwood 74th MM cars  which merited inclusion – by a nose!

How many do you recognise?:-

This was my 1st visit to a Goodwood Members Meeting and I have to say it was a spectacularly enjoyable experience especially as it constituted the first big classic racing event of the season.

The atmosphere was an unusual mix of the casual bonhomie of club events but with an unnaturally high preponderance of posh tweed-clad and cap/trilby donned punters.

Add to this a touch of the Harry Potters with the quaint concept  of inter-house competitions, refectory-style dining, stripey blazers and scholar-robe wearing guides and you had a uniquely British cocktail of pantomime and petrol!

It was only the chilly March weather which prevented the posh ’40s to ’60s frock and WWII military costume brigade from also attending which would have had the effect of turning it into a refrigerated version of Goodwood Revival.

Will I attend again? You’re bloody right I will!