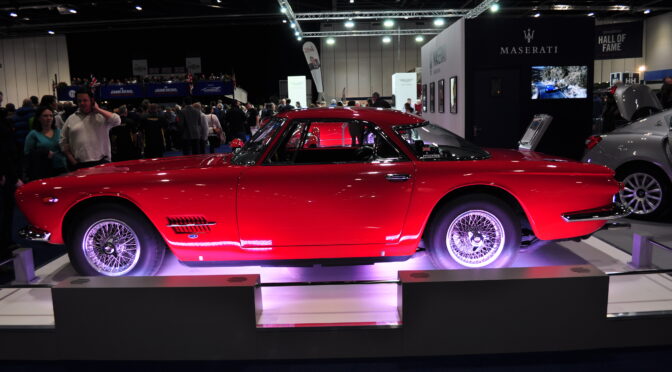 The lack of sunshine during the dark Winter months gives rise to a particular form of Seasonal Affective Disorder (SAD) which can result in susceptible people suffering from mild depression. This condition is treated by exposing sufferers to bright light.

I suffer from a very specific form of Seasonal Affective Disorder called ICDD or Interesting Car Deficiency Disorder!  The only viable treatment for this terrible affliction is to expose sufferers to interesting cars at any and every opportunity.

The London Classic Car Show at London’s Excel Centre provided just such an opportunity! Judging by the turnout – lots of other people had also opted to for a serious course of ICDD treatment!!!

There were some magnificent cars on show and proceedings were perked-up by some live action on the Central Avenue where a number of particularly iconic motors were driven up and down to the visual and aural delight of the audience. the idea was apparently borrowed from the Top Gear Live events and it worked well.

Not quite the Goodwood Festival of Speed because of restricted space and safety concerns but a very nice gesture for an indoor event. Let’s face it – purely static displays can be quite dull even for the most nerdy of car-anoraks.

There was a really nice display mapping the career of Adrian Newey through a range of cars and one motorbike which this brilliant car (and now yacht) design guru either designed, owned or raced.

I was really pleased to see this gorgeous Cisitalia 202 S MM Spider. As well as producing some absolutely iconic cars, this company was also indirectly responsible for the birth of the Porsche marque.

At the end of WWII – Ferry Porsche was in a real predicament. He urgently needed to generate money to free his ailing father Ferdinand from prison in France and he needed to get Porsche’s business back to work. With Porsche’s development factory in Stuttgart still under US occupation, Ferry and his closest colleagues were consigned to an old sawmill in Gmund in Austria but were having to make what little money they could by repairing agricultural equipment and vehicles in the absence of other funding streams and raw materials to build their own cars.

Fortuitously in 1946 Piero Dusio provided Porsche with a lucrative commission to design and build a new racing car. Porsche just happened to have a ready made design for an Auto Union that never was and this fitted the bill perfectly. The incredible Cisitalia 360came into being with its 1.5 Litre flat 12 mid-mounted engine  delivering around 385bhp and a notional top speed of around 200 mph.

Sadly Cisitalia ran out of money and GP rules changed before this wonderful car could prove itself on the track but the revenue accrued for it’s design secured Ferdinand Porsche’s release from prison and it kick-started the manufacture of Porsche badged cars with the 356.

A 1946 Pinin Farina designed Cisitalia 202 GT features in the Museum of Modern Art in New York as an automotive work of art. The Cisitalia 360 can be seen in the Porsche museum in Stuttgart.

This year is the 50th anniversary of the wonderfully whacky Citroen  DS. The car still looks peculiar now – imagine how people must have reacted at its launch in 1964?

The hydraulic suspension can make it seem more like a hovercraft than a car but it became a design icon and it spawned some wonderful specials including the Henri Chapron Decapotable and Citroen SM Maserati.

I love the fact that a Decapotable was deemed to be so futuristic – it was used in the Sci-Fi film Gattaca (driven by Uma Thurman). The film portrayed a distyopian future in which only the most genetically perfect could succeed. It was fitting that such a perfect motor featured as the automotive star – second only to inter-galactic rockets!

I used to think that the pure and unadulterated design of the original E-type Coupe couldn’t be improved upon but the Lightweight and Low Drag cars proved me wrong.

Their low slung, sleek lines and  fat, fully filled rear wheel arches give them a much more brutal and purposeful edge over their delicate narrow-tyre-shod predecessors. One could argue that Series 3 E-types with their wider bodies, wider tyres and big V12 engines also gave the impression of a Series 2 on steroids but to me – they looked fat and flabby by comparison.

The distinction between Lightweight and Low Drag cars is confusing. Jaguar tomes state that only 1 factory Low Drag car was produced using Malcolm Sayer’s slippery wind-tunnel tested bodywork. This was raced successfully by Dick Protheroe with the registration CUT 7 and still exists in the ownership of Viscount Cowdray.

Henry Pearman at Eagle Cars has used CUT 7 as the major influence of the Eagle Low Drag GT (one of which was on display at the show). Although it uses an original 60’s E-type as a base – the GT is completely re-engineered to produce a longer, more spacious, modern and even air-conditioned trans-continental GT car.

Only 12 factory Lightweights were supposed to have been built BUT a handful of these were converted to Low Drag form. So this means you could have Low Drag, Lightweight or Lightweight/Low Drag cars! All very confusing especially as many more E-types have been retrospectively been modified into Lightweight form.

My all time favourite is the Lindner Nocker car which falls into the Lightweight/Low Drag category. This highly successful racer was destroyed in a crash at Montlhery in ’63 which sadly killed the driver Peter Lindner. The crumpled wreck of the car was stored away for many years until 2007 when Peter Neumark of Classic Motor Cars was given permission to uncrumple the riveted aluminium bodywork and rebuild the complete car. Since then CMC have been using the knowledge gained in this rebuild to create authentic replicas.

If you only ever go to one car race in your life – it has to be Le Vingt-Quatre Heures Du Mans the ultimate test of endurance for cars, drivers and fans. It has changed over the years since I first went in the ’80s but it still has a unique atmosphere which at times feels like a British race that just happens to be held on French soil.

It was great to see some classic examples of successful Le Mans race cars on display at the show including a Porsche 956 driven by Jackie Ickx and Derek Bell from the early ’80s.

One curious little car which I’d never seen before was the Tojeiro JAP. With 1100cc V-twin JAP engine and Jowett Jupiter gearbox mated to a lightweight chassis and aluminium body the car was successfully raced by Brian Lister (Lister Cars) and his good friend Archie Scott Brown. The car’s designer John Tojeiro later produced the sublime AC Ace with its gorgeous Ferrari Barchetta inspired bodywork and AC, Ruddspeed Ford or Bristol power. The Ace was later morphed into the mighty Cobra thanks to a Ford 4.7 V8 heart transplant.

JAP refers to the V-twin motorcycle engine poking out of the bonnet. It was manufactured by J.A. Prestwich Industries founded by John Alfred Prestwich in Tottenham NE London (next to the Spurs ground).

This venerable engineering company produced cinematic equipment as well as engines used in aircraft, cycle-cars, cars and motorcycles. They also carried out specialised engineering work for other manufacturers including the production of cylinder heads for the Lotus Ford Cortina.

Some glorious engines were on display both inside and outside cars. The Bentley 8 Litre was a massive beast but my favourite was the Vittorio Jano designed Alfa Romeo 2300 Straight 8. Jano later went onto design for Lancia (the Lancia D50) and for Ferrari (V6 Dino and V8 engines). Here are a few of the engines that caught my eye:-

There were so many great and interesting motors at the London Classic Car Show . Here’s a selection:-